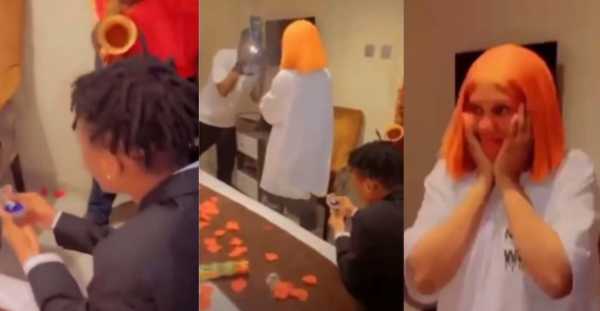 It has ended in tears for the adolescent couple who went viral after a video of their loved-up moment wrapped in a marriage proposal surfaced weeks ago.

According to multiple sources, the couple met in Benin City, Edo State, when he planned a special birthday celebration for the young lady.

In that video, the young man was seen wearing a dapper jacket and holding a flower. He also had a ring, so he went down on one knee and asked her to spend the rest of her life with him.

She accepted the proposal, and they hugged as a few friends gathered to capture the moment on video. The union is a new development in this new development.

According to online gossip being circulated, the young lady was accused of allegedly removing her engagement ring before going to see another man.

Watch the video below;

True love: 19-year-old boy proposes to his girlfriend on her 17th birthday in Benin, Edo Statepic.twitter.com/vP6ozYOpSj Previous article Liverpool vs Real Madrid: Gary Neville names club to lose Champions League final
Next article 2023: They are after my life – Smart Adeyemi cries out