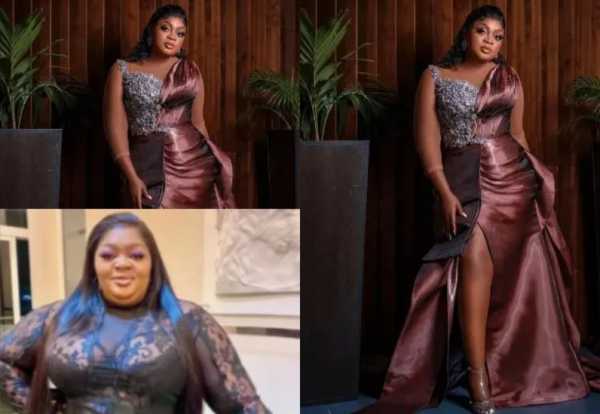 Popular actress is in the news again months after she was accused of going under a knife to get her recent banging body.

Since her body transformation, Eniola Badmus has never ceased to leave many of her fans in awe of her new look.

The actress stepped out in style for the AMVCA season 8 edition and many noted the huge difference between her former AMVCA red carpet look and the present.

Taking to comment section, fans hailed her for the new change.

Omo….na this kind transformation we need for this our country

Saw her yesterday and she’s now hotter than ever

Truth be told she did a good job on her body

Wow!!! Anything is possible!!!

janeblinky : Too good to be true

weeks back, the Plus-size actress and filmmaker, Eniola Badmus had declared herself as the most talked about celebrity in Nigeria.

The movie star via her Instagram page also added that asides been the most talked about, she’s also the hottest in the industry.

“Most talked about #EniolaBadmus Hottest right now🔥🔥🔥🔥,” she captioned her beautiful Instagram photo.

The post Actress Eniola Badmus Leaves Many In Awe Over Her Body Transformation At AMVCA [Photos] appeared first on Information Nigeria.