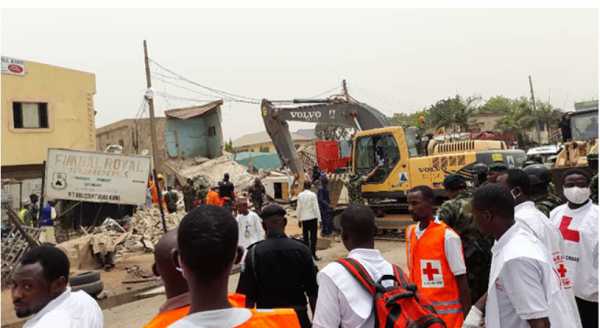 At least nine persons have died after an explosion rocked Aba Road in Sabon Gari area of Kano, the Ministry of Humanitarian Affairs said on Tuesday.

The bodies were recovered from the rubble of a collapsed building beside a primary school.

The police earlier said the explosion was triggered by gas cylinder and not a bomb as being speculated.

“It is not a bomb explosion, it is a gas explosion,” Commissioner of Police, Sama’ila Dikko, said in a voice recording. “A gas cylinder explosion.

“Because there is a welder, just by the place, and he is the first victim in this situation.”

Dikko added that the police, in collaboration with other security agencies, was also investigating what led to the gas cylinder explosion.

He maintained that the scene was under control.

The blast, which occurred on Tuesday morning, affected some buildings and left several injured, including school children.

According to the state commissioner for information, Muhammad Garba, the incident happened at an animal feed store opposite the school along Aba Road, Sabon Gari area of Fagge local government.

In a statement, Garba called on the people in the state particularly those living in the area where the incident occurred to remain calm while government, in collaboration with relevant agencies, are working on the matter.

The commissioner assured that government would keep the public abreast on any development and warned people to desist from spreading unsubstantiated news.