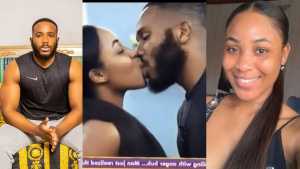 Prayerful fans have added Bbnaija housemates Kiddwaya and Erica, from the 2020 show, to the prayer requests.

Kiddwaya and Erica had a relationship stint in and out of the house. This relationship gladdened the heart of many fans of both housemates. Some fans wanted the house couples to tie the knot outside the house.

Read More: Kiddwaya At 31: Mother ‘Frantically’ Prays For A Daughter In Law

Thus, the supposed break up of both parties has now angered some of these fans, especially since both ex-housemates have refused to tie the knot.

The comment from Umelo.patricia sparked different reactions from other fans and observers.