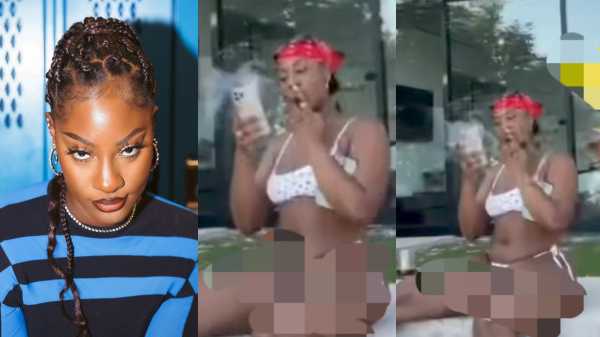 A video of sensational singer, Temilade Openiyi, better known as Tems, blowing of clouds of smokes have elicited reactions from netizens.

The songstress who is apparently having a nice time while vacationing in the United States was seen casually blowing off clouds of smokes alongside her, by the poolside was her colleague, Arya Starr.

See the video below:

Netizens have aired mixed reactions about the singer’s behavior:

_motayor wrote:
“You wanted her to be bashed for smoking?, with her own mouth?.”

pally_og wrote:
“If you ever think she don’t blaw after listening to her music. Then I no get sense 😂😂. She deep gon”

thedeltabeauty wrote:
“So wetin con happen if Tems Dey smoke? Make we fry stone chop? No be human being she be?”

The post Fans React As Tems Is Spotted Smoking Cigar During Vacation In US (Video) appeared first on Information Nigeria.