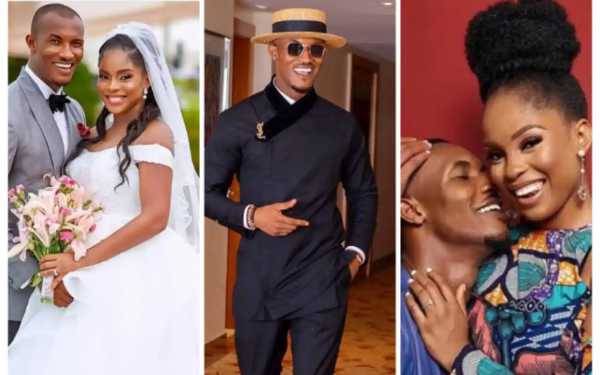 Gideon Okeke and his wife, Chidera, appear to be having marital problems.

Last month, the couple, who married in 2019, unfollowed each other, deleted images of themselves on Instagram, and ignored their wedding anniversary.

Gideon’s surname has also been removed from Chidera’s profile.

Chidera has removed her husband’s surname from her Instagram bio.

In 2019, Gideon and Chidera married in a star-studded wedding ceremony in Lagos.

Prior to their white wedding, the couple held their traditional wedding in December 2018.

Recall that Nollywood actor and TV presenter, Gideon Okeke some months ago talked about marriage.

“A marriage is NOT a 100m dash. Rather it’s a spirally unending relay race, where we continually exchange batons.

“Here’s some of what I’ve learned on My own: Dear husbands, don’t reduce your life expectancy by trying to be the Big Man, Always. You want to be there for your family even as your numerical age tends further north, and gravity pulls you physically closer southwards.

“The less dependent our wives, the more self-sufficient they are, which will make for a great baton exchange when the Day comes. Or else, only you 1 na him be Usain BOLT o.

“Dear Wives, notice that on the day of the “baton exchange” (figurative), the receiver needs NOT to look back. For as long as he’s on his mark, your cheer and footfalls have Him prepared for his own race. Matter of factly,

“His race starts where yours stops. You possess incubating and multiplying abilities to see that the collective race is won.

“Notice that the giver and receiver of the baton, both have their sights on the same finish line. Let’s have our children bear THEIR own crosses.

“Marriage is a team sport. Not Daddy’s solo event. You could break your back bending over backwards.