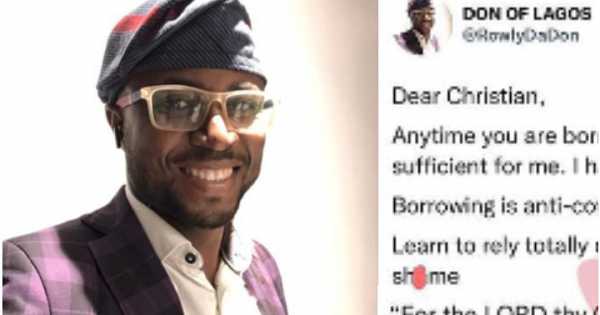 A Nigerian pharmacist has claimed that it is not right for any Christian to borrow money from someone else.

According to the pharmacist, it is a practice that implies that God is not sufficient enough for you.

The Twitter user, @RowlyDaDon argued that borrowing is “anti covenant”. He said that believers should rely on God totally for supplication as God never fails. He also quoted texts from Deuteronomy and proverbs to back his argument. He advised that christians should not walk on the realm of borrowing.

“Dear Christian,
Anytime you are borrowing, you are telling God “You are not sufficient for me. I have alternative to you”
Borrowing is anti-covenant.
Learn to rely totally on God & He will never put you to shame.

“For the LORD thy God blesseth thee, as he promised thee: and thou shalt lend unto many nations, but thou shalt not borrow.”
Deuteronomy 15:6a

“The rich ruleth over the poor, And the borrower is servant to the lender.”
Proverbs 22:7

“Exodus 22:25 If you lend money to My people, to the poor among you, you are not to act as a creditor to him; you shall not charge him interest.

There is nothing wrong in borrowing. There will always be the poor/needy among us and they will need to borrow. Do not guilt anyone”.

The post It’s Not Good For A Christian To Borrow Money – Man Says appeared first on Information Nigeria.

Previous article Actor Sam Ajibola Replies Those Who Said His Son Looks Like Obasanjo
Next article “Toyin Lies Too Much” – Caroline Hutchings Hits Back At Toyin Lawani, Spills Shocking Secrets