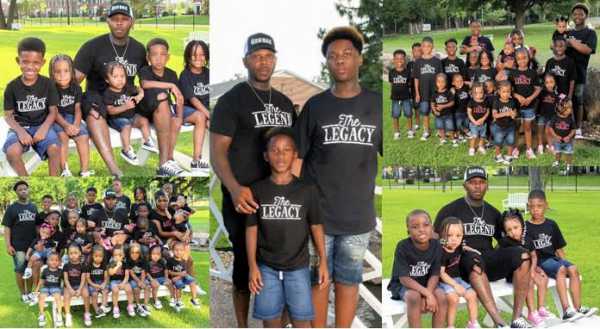 Desmond George, an African American man, has made celebrities like Nick Cannon and Future look like fools with the number of children he fathered.

The man took to Facebook to show off his 33 children, eliciting mixed reactions from social media users.

Desmond posted photos of the kids wearing matching black T-shirts with the inscription ‘The LEGACY.’

The father of all nations, as some refer to him, reportedly welcomed the children with various women; however, he stated that nine of them were unable to attend the photoshoot. Reacting, @EtuboLion wrote; How much does he bring home after child support? Dude must be Hella rich.

@KingLou31; That why Kings had multiple wives… man seed was to spread and as statistics tells it this year alone was the lowest birth rate in a generation so Kudos to him n Nick for repopulating the earth.

@Black__AF; I saw his fb live vid. All he kept talking about was having money to support them. Meanwhile, children need time and attention to be nurtured. He totally missed the point

@SmooveLifeCJ; All them kids look well taken care of. Mind ya damn business

@pablothe2nd; Instead of abortion laws there need to be laws against men doing shit like this

@Afabs91; As long as he can provide them with the necessities and being a good parent to each of them, there is nothing wrong with this.

@windes; Considering it’s 33, for any person even of wealth, that would be practically impossible especially with the overlapping ages.

The post Social Media Users React As Man Shows Off His 33 Kids From Different Babymamas appeared first on Information Nigeria.

Previous article Though I Play ‘Bad Boy’ In Movies, I Have Never Cheated On My Wife – Actor, Majid Michel
Next article Killing of soldier, kidnapping expatriate in Ondo shocking – Akeredolu