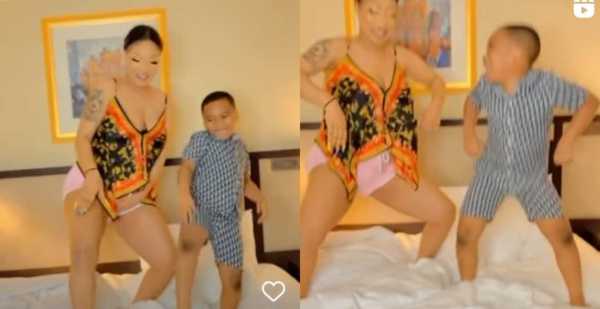 Controversial Tonto Dikeh, a Nollywood actress, has been warned by her fans not to use skin bleaching creams on her son.

This comes after a video of her and her son, King Andre, went viral. Her son’s dark knee and elbow were spotted and did not match the rest of his body.

Reacting to that, @Calebprodigy wrote: It’s like Tonto is bleaching this boy oh, look at how dark his knees are.

@Sexygrape wrote: “Why is she bleaching this boy. Na waah o.”

@Iron_syd: “Why she bleach this boy for God’s sake. Look at his knees and elbows. Yeye mama.”

Meanwhile; As the social media drama between Bobriksy and Tonto Dikeh continues, the actress took to Instagram to share a video of Bobrisky evading creditors by allegedly lying about being at home when they stormed his house.