Benue State Governor, Samuel Ortom has called on Nigerians to put religious and political differences aside and work together to save the country from its current security and economic challenges.

The Governor made the call when the Chairman of the Nigerian Governors Forum, NGF and Governor of Ekiti State, Kayode Fayemi paid him a courtesy visit at the government house in Makurdi.

Dr Fayemi, a Presidential aspirant on the platform of the APC was in the state to reach out to delegates ahead of the party’s presidential primaries later this month.

Governor Ortom said all Nigerians, both in the APC and PDP, Christians or Moslems must exhibit non-partisanship to jointly tackle the challenges facing the country because as he puts it, “All of us are involved and there is the need for us to work together to rescue our nation.” 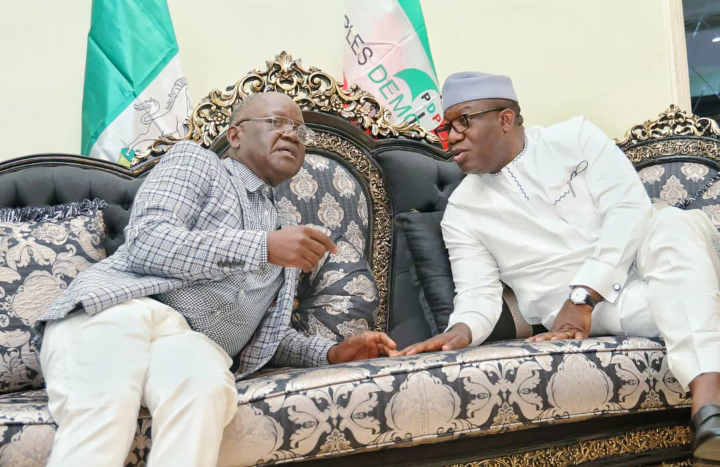 The Governor commended those who, across party lines, have indicated interest to serve the country and appealed that whoever God chooses to lead to consider the interest of the country above personal considerations.

In his earlier remarks, the APC Presidential aspirant said it was customary for him to visit his colleague, Governor Ortom before moving over to the APC State Secretariat to meet with delegates in continuation of his consultations.

He said in solving the myriad of challenges in the country, the Chairman of the Nigerian Governors Forum noted that key triggers leading to security challenges, which include extreme inequality and poverty as well as national cohesion must be addressed if he becomes the country’s next President.

We must work together to save, unite, rescue Nigeria – Ortom to Fayemi