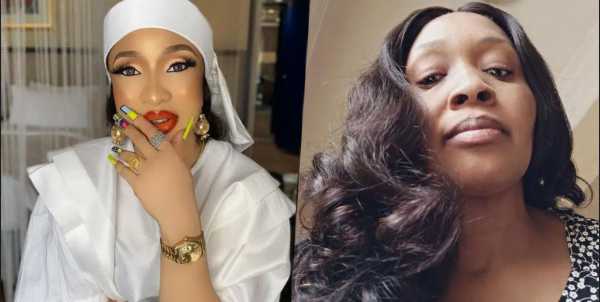 Kemi Olunloyo, a controversial journalist, laments Tonto Dikeh’s obsession, despite threats to have the journalist arrested.

This follows an interview granted to the thespian’s ex-lover, which quickly escalated into back-and-forth tantrums between the two.

Tonto Dikeh took to Instagram to announce her arrival in Lagos, claiming to have Kemi’s home address after she was accused of drug use.

In response, Kemi Olunloyo wrote a Twitter thread in which she questioned the mother of one’s obsession with her.

“Ms Tonto Dikeh
The obsession she has for me is typical of an active drug user. I have invited her to join the war on drugs via education instead of begging the
@ndlea_nigeria
to test her and make her an ambassador. Tonto start building yourself and stop erratic behavior.

My close freelance investigative colleague Hamid
@gulf_news
who told me Hushpuppi was taken to 🇺🇸 by the FBI just briefed me that Tonto was arrested in Dubai 2020 for possession of drug paraphernalia and drugs. Her visa was later cancelled and she was sent back to Nigeria.

Tonto Dikeh’s friends also told me that she can never pass a drug test. I want her to build herself away from drugs and get solid treatment. Her fans are messaging me to report her threats. Why she’s threatening me is beyond me. Hamid says she can never set foot in Dubai again

#MentalHealthMatters goal is not to stigmatize an addict but to help them. An addict must be willing to get off and stay off drugs. I hope Tonto will not be admitted forcefully into a hospital while she’s in Lagos. Journalist Hamid said she fought 🇦🇪security men who busted her😳

Wishing Tonto Dikeh well. Rehabilitation works. This is the type of crack pipe she dropped at a business acquaintance’s office similar to the one
@DubaiPoliceHQ
locked her up for. Her behavior is extremely erratic.

The post “Why Is She Obsessed With Me?” Kemi Olunloyo Reacts As Tonto Dikeh Storms Lagos To Arrest Her appeared first on Information Nigeria.