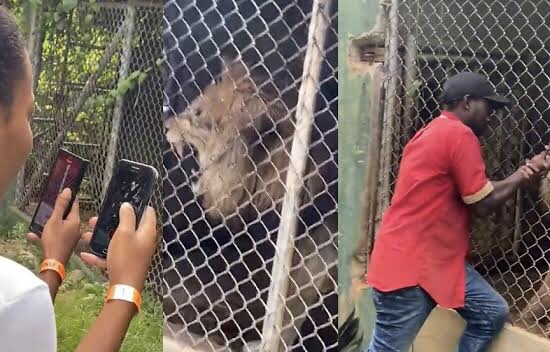 A lion bit off the overzealous zoo attendant’s finger at an attraction in St Elizabeth, one of Jamaica’s largest parishes.

According to reports, the incident occurred around 4:22 p.m. on Friday, May 20.

Eyewitnesses who filmed the unfortunate incident revealed that the zoo was about to close when the zoo attendant attempted to pet or tease the lion in an apparent attempt to impress visitors.

After sticking his hand through the chain-linked lion’s cage, the Zoo attendant paid the ultimate price when his right ring finger was partially bitten off.

Below are some reactions that trailed the video –

But why are you standing that close to a lion? You think say na Bollywood?

Now the lion has tasted human blood,will want more and too dangerous. Needs to be sent into the deep Bush or we risk the lives of visitors and workers

_chynwe
Now you have a story to tell your kids, people act foolishly. If you like lie and say you were helping Samson to fight lion.

You never feed lion,you dey give am your hand 😂😂😂😂😂he’ll surely bite the fingers that fed him

The post Zoo Attendant Trying To Impress Tourists Pays The Ultimate Price As His Finger Gets Eaten By Lion (VIDEO) appeared first on Information Nigeria.